As my Western doctors seemed to be clueless about some minor (but irritating) skin problems I am having, I tried TCM concoctions (Traditional Chinese Medicine). My friend doctor Gloria has patiently given me several TCM concoctions to drink.
She admitted that she herself would rather suffer the skin problems than drink the “tea”.
She recommended to only buy at Tongrentang, the famous and old pharmacy chain of Beijing. 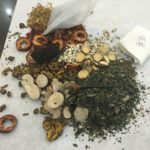 I would not try to identify the real content but yes there were centipedes, snake skin and stuff.
See the Tongrentang staff preparing the packages: one per day.
You have to boil it for some 20 to 30 minutes in a special pot (no metal).
And yes it tastes AWFUL. But I followed the whole treatment.

Besides this my doctor gave me a long list of food and drinks I should avoid.
Well, I wonder what I still can eat. At least a Belgian steak is allowed, but alcohol in whatever form is strongly opposed. No fun when I love a Belgian beer, red wine and a single malt.

So, my verdict? I would not dare to come to a conclusion yet though I do see some results. I do have a respect for the way TCM looks at the body and mind, something Western doctors mostly overlook (reason their treatment was totally useless).

One thought on “Daring to try TCM concoctions”