A human flesh search engine is a term invented in China, see the Wikipedia definition. “It relies on voluntary crowd sourcing: Web users gather together to share information, conduct investigations, and perform other actions concerning people or events of common interest.”

Without really thinking much, I launched such a search, unaware of what would happen.

It all started when I was looking with a Chinese friend at a picture, taken in 1981, of me and my Chinese secretary, Mr. Chen Jilun, at the door of the ACEC office in Beijing Hotel West Wing Room 5109.

We worked together till 1988 when I left for Hongkong. We kept in touch till 1995 (I guess) but then we lost contact as I moved from Beijing to Shanghai.

How to find my Monsieur Chen?

In those times there was no e-mail, no mobiles as today. He had been working for what was at that time a well-known company, “Friendship Company”, that was the sole supplier of staff for foreign companies. Obviously long gone and out of existence.

So I had no idea how to search. Then my friend said, let me try Douyin (the Chinese TikTok). So she posted the 1981 picture along with a recent picture of me and explaining a foreigner was looking for his old friend Mr. Chen Jilun, who was originally from Henan but living in Beijing.
See here the Douyin video:

I also gave her some more old pictures:

Then it went all wild. We had close to one million hits. People asked questions. Henan Radio and TV called me. My friend was panicking with the success.

Three days later she sent me a WeChat. “We found him!”. She sent me his mobile number. I called and he was already expecting my call…

We were both so happy to make contact again.
He explained that actually six people in China had identified him and called him, and he authorized to pass on his number.

As I suggested, we met for dinner in Morel’s Restaurant on Sunday 14 July. I asked my friend who did the Douyin to join us too.

Mr. Chen still looked much the same, while he is a few years older than me. He brought me a nice present, of course from Henan! See the short video:

We had a lively chat and will keep in touch, through WeChat, of course. 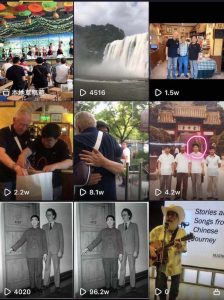 Many people that connected through Douyin wanted to see our reunion, so we posted several videos of our dinner, and a picture with chef Renaat Morel. See the Douyin overview with the numbers (units are w = 10,000).