I witnessed the 1 October 1984 Military Parade for the 35th anniversary of PRC, the first in 24 years. After 1984: 1999 (50th anniversary); 2009 (60th anniversary – with me!); 2019 (70th anniversary).
That time I was working and living in the West Wing of Beijing Hotel, with my office in suite 5087.
The hotel had asked us to leave a few days ahead,  as on the day of the parade we could not leave, we could not open a window nor stand “too close” to it.
I decided to stay. It was a unique experience. Armed with my camera I stayed on a chair to look over the balcony at Chang’an Avenue below. Security was all over the parking lot, armed with binoculars and scanning the windows. As expected, they saw me and soon got a visit to “behave”. I didn’t.

In the evening I was able to see the fireworks on Tiananmen from my balcony of my bedroom (5109), that had a great view on the Forbidden City and Tiananmen. That room and balcony no longer exist as a new hotel was built next to the West Wing. As far as I can reconstruct, I then went out to Tiananmen and shot more pictures there.

Ah I miss those times. Tiananmen had zero barriers, you could walk over there any time of day and night. I even remember I rode my Vespa on that square! (yeah I had an embassy plate…).
The pictures of the fireworks are great, already at that time China was a master in doing it. No need for fake stuff on TV screen (like for the Olympics fireworks…). It was all real.

I recovered the VHS tape with the full coverage of the 1 October 1984 Military Parade. The quality is poor, I actually assume it is a copy of the original VHS tape done by a friend, see some screenshots. Mind you that was some 35 years ago… different technology today!
Interestingly the images do not have any CCTV or BTV logos! I was wondering, is the tape that bad or was there really such a horrible pollution?

no images were found

Yes, pollution was terrible that day. At that time nobody paid attention to something called AQI as we never heard about it. I guess AQI was way above 500.

The proof was with the pictures I took that day, see the scans, all enhanced as much as possible. It’s a thick haze. Most of the time it had a sulphur smell (and color). I still have tons of old pics to scan, and to find back the negatives.

◄123
Pretty interesting to see those images of 1984, the people, the trucks, the soldiers, the floats, the TV presenters. On 1 October 2009 I was myself in the parade, on a float. Our daughter was running besides it with other young people. Somehow things change little, somehow things change a lot.

I saw Madam Chen Muhua in the movie (she is not listed below). She was a remarkable person and I had a lot of respect for her. I also met her at one point, I forgot when. But she did visit the company in Charleroi I was representing in China: ACEC. Another great lady I met a few times in person was Vice President Wu Yi. Sadly, I don’t see ladies like that today in the government. 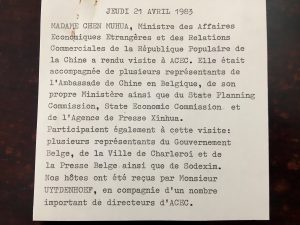 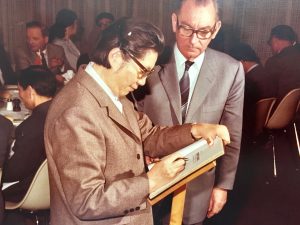 Chen Muhua, Vice Premier – State Councilor. She also served as Minister of Foreign Economic Relations and Trade. The veteran Communist Party of China revolutionary, the second female vice-premier, held several other key posts including state councillor, Standing Committee of the National People’s Congress vice-chairwoman and All-China Women’s Federation president. In 1985, she became the People’s Bank of China governor and was credited by some as a pioneer of China’s financial reform.

Watch (with comments in Cantonese) the parade (Youtube, needs VPN):

One thought on “1 October 1984 Military Parade”