TCM explained 2. A look at moxibustion, a well-known TCM treatment. See how it is mostly used. But does it work? Is it safe? Debunking some myths.

One can find details here and here.

Moxibustion is a traditional Chinese medicine therapy which consists of burning dried mugwort on particular points on the body. It plays an important role in the traditional medical systems of China, Tibet, Japan, Korea, Vietnam, and Mongolia. Suppliers usually age the mugwort and grind it up to a fluff; practitioners burn the fluff or process it further into a cigar-shaped stick. They can use it indirectly, with acupuncture needles, or burn it on the patient’s skin.
Generally speaking mugwort is used. See the earlier article.

How it is used

A practitioner burns the herb “moxa” on or above the skin to warm and stimulate specific points on the body. Practitioners use moxibustion either as a stand-alone therapy or in combination with acupuncture.
The “cigars” are lit, they can be used directly or inserted in a copper device, see here what I found at home:

There are also pouches that can be affixed to certain parts of the body, with smaller tablets that are inserted after letting them burn.

Needless to say, as it is normally done inside a room, the smoke is very polluting.
Exposure to the particulate matter (PM2.5 in particular) present in the smoke has been linked to asthma, lung inflammation and even cancer. In fact, long-term exposure to incense and moxibustion smoke was found to be related to an increased risk for upper respiratory cancers as well as squamous cell lung cancer.
Not recommended anyway in your home…

In traditional Chinese medicine, moxibustion aims to stimulate the body’s flow of vital energy or “qi” and remove toxins.
Western practitioners may use moxibustion to help alleviate pain and inflammation from various ailments. However, there is insufficient scientific evidence to support its effectiveness.
Although moxibustion is often used as asymptomatic treatment for a wide range of conditions in clinical practice, e.g., arthritis, gastrointestinal problems, gynecological complaints and stroke rehabilitation, its clinical effectiveness remains uncertain, and many experts doubt its biological plausibility.
So, I am not that convinced. But the heath of the application can maybe alleviate some pain… and make you feel better.

This uses infrared light, with “moxa disks” of mugwort, with a special machine, see pics of advertised machines available world-wide. See the machine I sometimes use (see the moxa disks, the oil, where to insert the disks).
You can control temperature and timing. 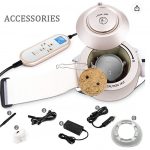 When I  use the machine I apply the “massage oil” on the treated body part. Effective? I don’t know, but at least it’s very comfortable and does not produce smoke!