Greek food or hotpot in Beijing. Greek is an obvious choice: Athena Greek restaurant.
I finally made it back there after a long time, with all the COVID mess. Both Renaat and myself enjoyed it. We had Greek Salad, lemon chicken soup, other dishes and some deserts.

The beer I had: Russell Brewing Company, British Columbia, Canada. Pretty nice (but not Greek!).
Moussaka was very good, it’s a potato-based dish with ground meat. The best-known version in Europe and the Americas is the Greek variant created in the 1920s by Nikolaos Tselementes.
The “lamb” chops could be better – basically mutton and not lamb. Deserts, such as rice pudding, were very good.
Nice sitting outside (and inside too). The restaurant is famous for its good lunch buffet.
Located close to the Spanish embassy.

I admit I like hotpot and my favorite is Haidilao Hotpot in Beijing Sanlitun 3.3. Rather cheap and very attentful service. Always ordering too much so I took home some doggy bag with left over vegetables. Their beer is quite OK. We had the noodle-making mini show too.
The cows? Going there we saw the cows in 3.3, they looked pretty real…

Haidilao Expects $600 Million Loss in 2021
Haidilao, a Chinese hot pot chain, announced Monday that it foresees a net loss of about 3.8 billion yuan to 4.5 billion yuan as of Dec. 31, 2021. The revenue in 2021 is expected to exceed 40 billion yuan, an increase of more than 40 percent, compared to 2020 revenue of about 28.6 billion yuan. (
Haidilao estimates losses mainly due to the following factors: First, in 2021, Haidilao closed more than 300 restaurants and dropped restaurant business performance and other factors resulting in losses totaling around 3.3 billion yuan to 3.9 billion yuan. In addition, the restaurant chain’s operations were impacted by the continuing changes in the global landscape and repeated outbreaks.

Dishes from my hometown

The best Belgian food in Beijing (2) you can find in Morel’s Restaurant. In this part: specialties from Ghent and more.
The most famous dishes from Ghent are Waterzooi of Fish and Waterzooi of Chicken. I am thus unhappy with Renaat as he has removed them away from the menu… But to make me happy he sometimes makes me a mini waterzooi of fish or a gratinated fish (pretty similar).

Waterzooi is a stew dish from Belgium and originated in Flanders. The second part of the name derives from the Middle Dutch terms sode, zo(o)de and soot, words referring to the act of boiling or the ingredients being boiled. It is sometimes called Gentse Waterzooi which refers to the Belgian town of Ghent where it originated. The original dish is often made of fish, either freshwater or sea, though today chicken waterzooi is more common. The most accepted theory is that rivers around Ghent became too polluted and the fish there disappeared.

Not really from Ghent but considered there a special delicacy is Atlantic cod fish, hard to find the real one in Beijing and very expensive. Atlantic cod has a slightly sweet taste, with large flakes that fall apart easily when cooked. See several ways to serve the codfish.
Kibbeling is sometimes on the menu and it’s a special part of cod fish. also called fried cod bits (normally the cheeks of cod fish).

In Morel it is rather “Filet Américain” Belgian style. Filet Américain, steak tartare or quite simply préparé, is made out of raw ground beef, which is then often spiced with piri-piri, Tabasco, mustard, cayenne pepper, gherkins, salt, ketchup, and Worcestershire sauce. Ingredients may vary. The Belgian way is to finely chop the meat with a knife to have a smooth paste.

On the Morel’s “secret menu” is also the Martino sandwich that uses filet américain plus plus. I add anchovies… Super! See the versions with and without anchovies. It has quite a history!
In Belgium the most popular sandwich is not ham and cheese, it is a spicy sandwich that was invented by Albert De Hert, a former football player who owned a restaurant in Antwerp for more than 50 years.  Albert also worked in a snack bar called ‘Quick’, it was located at “The Coninck Square”, near the central station. A square that at that time was full of nightclubs. There he would have launched his famous martino sandwich.
The story goes that another Belgian football player and friend of Albert, Theo Maertens, who called himself Martino, once ordered a spicy sandwich of meatloaf to get over his hangover.
“Put everything what you have in the cooler on it, he asked,” So Albert served him a sandwich with chopped onion, slices of pickle, tabasco, piri piri, cayenne pepper, ketchup and Worcester sauce.
The recipe struck and became a concept in Antwerp and later the rest of Belgium, the sandwich is still very popular today.
The Martino consists of filet Américain (raw minced beef) mixed with seasonings, mayonnaise, and egg yolk then blended to a pink paste and spread on a split baguette and served with pickles, onions, boiled eggs, etc.

Certain types of Martinos are made with anchovies (my choice!).
“Martino” is the famous eatery in Vlaanderenstraat 125, Gent 9000.

Some restaurants make a lot of noise about their “pure water”. In Morel’s, it is considered a normal component of high quality. They use OZNER equipment, supposed to be one of the best in China.
Ozner Water International Holding Ltd provides water purification systems in China. 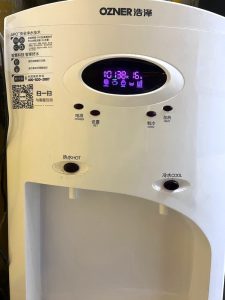 What is Belgian food?

The best Belgian food in Beijing (1) you can find in Morel’s Restaurant, the best Belgian Restaurant in Beijing.
Many friends even say the quality is often superior to what you find in Belgium.
Belgium is at the crossroads of Europe and the food is strongly influenced by French cuisine but also by German, Dutch and genuine local Belgian cuisine. The restaurant hardly changes its menu – as many top restaurants do, but Renaat can surprise us with unexpected delicacies.

One of the most popular dishes in Belgium is called “stoverij”. “Carbonades à la Flamande” or in English, Belgian (or Flemish) Beef Stew – of course prepared with Belgian beer. A dish often eaten on the street in a “frietkot”, see below.
One of my favorite dishes is the gratin of endive and ham. Learn here what is actually “endive” or “witloof” as we call it.

Very famous of course are the mussels with Belgian fries. Only in Morel’s you find the gorgeous mussels that are delivered alive to the restaurant where they are cleaned, sorted and cooked the Flemish way. The vast majority of mussels in other restaurants are brought in frozen, you can easily taste the difference as those are not juicy but a bit dry inside.

Belgian fries are of the best in the world and must be prepared the traditional way.
If there is one thing you should definitely do while in Belgium, it is to eat Belgian ‘frites’. Not only can you eat them in restaurants, you can also get them at a frites stand, or a ‘frituur’ or ‘frietkot’ as they are known in Flemish, see the ones in Ghent. Ghent’s favorite order is large fries with beef stew sauce and mayonnaise.
Belgium has a long history of deep-frying. The first frites stands were mobile and the first frites stand with a permanent location only appeared after World War II. Today, you can find them on market squares and along the main roads. But just like everything else, the art of deep-frying has also evolved: you can take away your frites or eat them on the spot in today’s modern frites stands.
In addition to frites, they also sell a wide range of snacks and sauces. Of course, today’s frites stands keep up with their times: many of them also offer a range of deep-fried products for vegetarians and vegans.

Our Old China Hands lunch 2 September brought together 32 of our members. We also welcomed the baby of OCH Josh. As always, all happy chatting and enjoying the good food.

The next lunch is planned for Friday 7 October, due to the October 1 holiday week.

And more about our famous OCH

Raja is competing with our star Mark for media exposure.
See here his latest in English through Beijing Review.

But beating all is Renaat Morel. I guess he has like an interview every two weeks…
On 10 September at 10 pm we all watched live BRTV showing a program about the GuoAn soccer club and its long relation with Morel’s Restaurant. GuoAn normally uses Worker’s Stadium as its base and should return there once the new stadium is opening, I guess early next year.

I don’t have the link for you to watch but see some screenshots while we watched on the iPad. And of course the famous candle…

Renaat Morel is the three Michelin stars chef who now does not want any stars anymore but is the proud owner of the best Belgian Restaurant in Beijing. Or should we say, in China.
Morel’s Restaurant is the only one in Beijing offering genuine Belgian cuisine in a charming interior. The menu of traditional Belgian and French dishes is composed by the celebrated chef Renaat who previously served Royalty and famous stars in the South of France.
The famous TRB, Hulu and more managed by Belgian Ignace Lecleir are great places to enjoy the best of European cuisine.

The restaurant has been in the same location for far over 20 years, a real feat as so many restaurants open and disappear.
The evolution of the customer base is remarkable. In the first decade the vast majority of the customers were foreigners. In recent years at least 80% of the customers are Chinese – who are also bigger spenders! 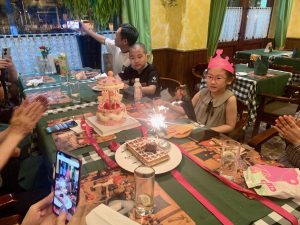 It is also very much in demand for birthday celebrations!
The take-away and delivery has become an important contribution to the revenue, when a few years ago that service did not even exist.

The restaurant is run by Renaat and Susan, his wife. Susan is also a great florist and the flowers you see – and receive – are of the highest quality.

The restaurant has been featured in innumerous media, and was already mentioned in Beijing Weekend in June 2000.

Chef Renaat has an imposing track record, already mentioned in detail in a previous post.

So many TV shootings were done that it’s impossible to mention all. See:
“Chinese Destiny” is a documentary program about cross-cultural characters produced by the Chinese Global Program Center of China Media Group. “Foreign chefs in Beijing” (short appearance of … Gilbert)

Earlier in 2022 several days of invasion by CCTV4 in Morel’s Restaurant and Café for a documentary about Renaat and his restaurant, shown worldwide.

On 16 September 2018 Renaat Morel was decorated in the Belgian Embassy, in the presence of the Ambassador, the Governor of the Province of Antwerp and many guests.

What about the food?

That is another long story, to be published soon!