On 9 August 2022 we welcomed Sherry Liu speaking at Beijing Rotary lunch.
Sherry Liu was once a prominent lawyer in Arizona, later an executive of Motorola, China. She was named  one of the best solicitors in 2004, graced the cover of American Lawyers Magazine, interviewed by BBC and CNN. At height of her successful career as a top executive at Motorola a disease diagnosis changed her life‘s trajectory, she soon found herself on the journey of self-discovery propelled by the innate desire to heal herself. Today she is a poet, painter and spiritual teacher. Ms. Liu brought some of her original paintings and some books to our meeting.

See here the pics of our well-attended meeting, the paintings and books of Ms. Liu and the food.
Once more I acted as Sergeant-at-Arms and sold some of the Rotaract mugs, see below.

Rotaract Club of Beijing West and the history of Rotaract

I still miss the Club that at one point was so vibrant and successful. Lynn, a kind Rotaractor and former secretary of the Club, kept the leftover goodies and was so kind to send it all to my office. Included was the banner and many of the mugs they had made.

The idea for Rotaract emerged in the mid-1960s, building on the success of Interact, Rotary’s service program for young people, which was founded in 1962.
Rotary members were looking for a way to promote Rotary to college students and other young adults who were over the Interact age limit. The answer was Rotaract: a service program for men and women ages 17-25 that would be sponsored by local Rotary clubs. (The age requirement later changed.)
The idea became reality in January 1968 when Rotary approved the Rotaract proposal. Members of the Rotary Club of Charlotte-North, North Carolina, USA, had worked with local university students, and they seized the opportunity to sponsor a Rotaract club. The first Rotaract club was certified by Rotary on 13 March 1968 at the University of North Carolina at Charlotte.
In the weeks that followed, more Rotaract clubs were started in the United States, Mexico, Italy, and India. About a year later, Rotaract boasted more than 200 clubs in over 25 countries and geographic areas.

On 2 August we had our members-only lunch at Kempinski Hotel, to inform our members about the Board Meeting that was held the day before.

Interesting talk and good food. Kevin trying to explain financial stuff. Complicated for an engineer like me.

Looking back Beijing Rotary (2) focuses on a full day: 10 March 2018, that started in the Four Seasons Hotel with the China Conference.

The slides show our impressive past when we had so many active clubs, Rotary, Rotaract and Interact. Check the pictures to discover the situation that time and the big turnout.
It’s a piece of history…
Our president was Russell Brown.
You will see also in the pictures: Frank Yih, Ricard Zi, Mike Ma, Gary Huang, among others.
Of the clubs you find in the slides, this is as far as I know the present situation (officially active):

Rotaract Clubs: all terminated as for now

The same evening in the Four Seasons Hotel we had our ball with many of our Rotaractors.

I am not sure when we can have any of those remarkable events again, with all the restrictions (COVID, regulations, dwindling membership…).

Cleaning up my pictures

I have been busy trying to clean up and reorganize my thousands of pictures. I managed to wade through 2022, 2021, 2020, 2019 and 2018. Result is a first batch of “Looking back Beijing Rotary 2018”.
The year 2018 was a super busy year for me, trips to Indianapolis USA, the shooting of the Jialing River movie, great stay in Phuket, many events, seminars, parties…
Remarkable is the amount of events with Rotary and Rotaract. Our clubs were so busy. It is a bit sad to see the pictures and noticing how many friends left Beijing.
The President of the Rotary Club of Beijing was Russell Brown, later followed by Martin Glatz.
I feel proud to have been so involved with our two Rotaract clubs who were so active.

On 13 January 2018 I organized a buffet dinner with the help of Rotaract volunteers who also took care of receiving the payments.
It was called “Rotaract & Rotary Meet & Greet & Drink”, the event was very well attended by both Rotarians and Rotaractors, see the pictures that talk for themselves. Sadly many have left Beijing… Some four presidents of our club attended!

We also had the  induction of two new members (Robert Specht & David Boyle) by (then) President Russell, after a banner exchange.
More to come soon! Rotary Conference and Red Lantern Ball!

Beijing Rotary in April 2022 was still active before one more COVID scare hit Beijing, shutting down all activities.
On Tuesday 19 April 2022 we had our lunch in Kempinski Hotel with Lucia Zhou, Program Manager of HOPE as our guest speaker. Lucia is a Certified Therapeutic Riding Instructor recognized by PATH International (Professional Association of Therapeutic Horsemanship).
Topic: Update about HOPE and the Benefits of the Equine Therapy.

HOPE (Horses Offering People Enrichment) offers equine assisted activities and therapy (EAAT) for children with special needs. Founded by a Californian woman, HOPE was brought to Beijing to provide equine assisted therapy for children with sensory disorder, physical/visual, emotional/social disabilities, and autism. RC Beijing has in the past year sponsored an Instructor Training for one equine therapist through the Instructor Educational Course. Lucia Zhou, the program director at HOPE and a Certified Therapeutic Riding Instructor recognized by PATH International (Professional Association of Therapeutic Horsemanship), brought to the meeting the instructor trainer who has recently completed her trainer training program, and a young adult who has received the equine therapy from HOPE. Lucia thanked the club for the support and sponsorship. With her training completed, the trainer is now equipped with skills to design and create tailored-made programs to benefit the children in need and is qualified to train other equine therapists to further their service in the community. Lucia and her colleagues expressed their wish that the club could continue to provide financial aid toward their instructor training this year.

Haochuan Tom Zhang also shared his experience at HOPE. While receiving therapy from HOPE, Tom also helps with working around the stable, looking after the horse he had ridden, and assisting with equine therapy.

I had the chance to meet the HOPE team earlier and I also saw several of the videos showing the remarkable effect of the treatment. 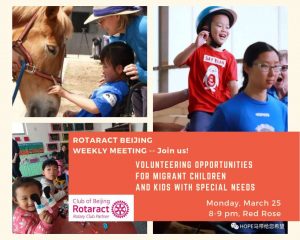 On 25 March 2018 Rotaract invited the HOPE people to give an introduction to their program, in the former Restaurant Red Rose.
The effect on kids with mental disabilities can be impressive. We saw kids that refused all communication with adults, they started riding the horses and created a bond with them. Then suddenly they spoke words never heard before…

See some screenshots of the online meeting. I only saw myself appearing “life” from our club. And yes we even had a “group picture”, try to find me…
I had hoped to see more updates of all our China clubs as some of the clubs are struggling or even closing. While the guest speaker did a good job. I thought it was not relevant to what we really wanted to learn.
And we never got the slides that were shown…

For our Rotary lunch 8 March 2022 we had as speaker Sjoerd den Daas, Correspondent of the Dutch Broadcast Corporation NOS who reflected upon his recent experience of the Winter Olympics from a journalist perspective. 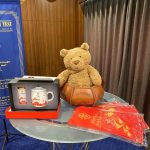 We also concluded the auction of the Winter Olympic tea set I donated for the following Rotary Disaster Fund:
The United Nations estimates that number of Ukraine refugees could grow to as many as 5 million people displaced. Inter-country Committees and Rotary clubs in Europe and around the world have stepped up their relief work, some working on the ground to help displaced families.
Rotary International has established a special Committee that will coordinate the provision of assistance from around the world to Ukraine, funds will be used to supply water, food, medicine, shelter, and clothing.
See here to donate directly: https://my.rotary.org/en/disaster-response-fund

As things become more and more complicated in China, Rotary is not allowed to operate normally, so many restrictions.
How times change. See here an announcement I did in March 2005 for the Rotary Charity Ball. 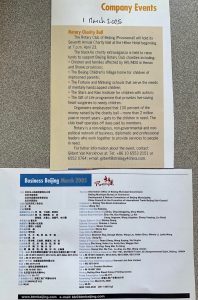 This today would not be allowed anymore.
Oh well…

Rotary eClub 3170 Guest Speaker Gilbert Van Kerckhove
Rotary Club of Beijing, China
I also talk about my origins, what I did in China…