On 24 December Beijing woke up to an alert from the U.S. embassy that there was a risk for terrorist activity especially in the Sanlitun area.
Police and special security teams were present en masse, side streets were blocked, no more parked cars and part of the bar area in Sanlitun was blocked. Many people were scared and it all upset our plans for the evening, to celebrate Christmas Evev with our friends.
This time no place in our home office for our usual mega party as it is now a warehouse of antique furniture and stuff. So we opted to head to “Beer Mania” in Sanlitun Nan Lu, managed by our Belgian friend Thierry who offered an attractive menu.
Some of our friends did cancel but we were still a large group to enjoy the good beer and food. 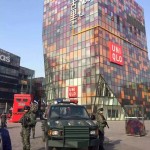 It was also a very bad period of pollution. See some of the readings, one is taken on my balcony with the LaserEgg. Many jokes went around, like Santa was not coming to Beijing because he could not find it…
The day was full of surprises. Out of the blue my Vietnamese friend called me, we know each other since 1990 and worked closely together when I was doing the Vietnamese telecommunications market. He is now a deputy minister and was with a delegation in Beijing. We finally found a way to meet in his busy schedule, in our home after the Christmas Evev party. It was wonderful to see such a good old friend after so many years. Seems the Vietnamese located me as we had somehow lost the right contact numbers.