The WHO has given the devil has a new name, Covid-19; formerly known as NCP, 2019-nCoV or the Wuhan Virus. 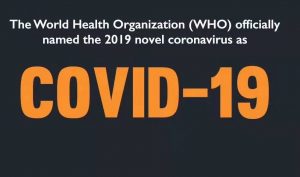 At the opening of the conference, the head of the WHO, Tedros Adhanom Ghebreyesus, said that the Covid-19 epidemic is a very serious threat for the rest of the world.

According to news from Yahoo, scientists say at least 500,000 people may become infected with the coronavirus in Wuhan before it peaks in the coming weeks.
Researchers at the London School of Hygiene and Tropical Medicine put together a mathematical model to determine the spread of the disease in Wuhan, and they said it was likely to peak in mid-to-late-February.
Based on their estimates, at least one out of every 20 people in Wuhan — or about 500,000 people — could be infected by the time the virus peaks.

The WHO warned that the spread of the virus through people who never visited China might be “the tip of the iceberg”.
Gabriel Leung from the University of Hongkong tried to estimate “size of the iceberg”. He estimates that 60% of the world population could be infected by Covid-19. He is said to be a world expert on corona virus and joined some 400 specialists at the WHO conference in Geneva.

Maybe that’s all a bit overblown…

Mobility in most cities worse

China’s two biggest cities have announced fresh restrictions on residential communities to prevent the spread of the deadly new coronavirus, joining dozens of mainland cities that have gone into partial lockdown since the epidemic began last month.
Measures unveiled by the authorities in Beijing and Shanghai on Monday include stricter controls on the movement of residents and vehicles, compulsory mask-wearing and shutting down leisure and other non-essential community services.

Beijing would step up efforts to further restrict access to residential communities and compounds and introduce a citywide registration system for entries into Beijing. Cultural and recreational facilities will be closed while couriers and other delivery services will have limited access to housing estates and compounds.

See how deliveries are piling up at the main entrance of our compound and how compounds in Tianjin and Beijing monitor access.

As some said, with restrictions in place for the past two weeks, it felt like “living in a prison”. “I hope the period of lockdown will not last long because I want my normal life back.”

Containment “must not harm business”

As reported by SCMP, there is a conflict between the central government that wants many of the economic activities to restart and the infamous Chinese bureaucrats.
As millions of people in China prepared to return to work, Beijing has said the reopening of businesses should not be hampered by “crude and oversimplified” restrictions.
Up to 160 million people were expected to be returning to their cities of employment over the coming week, according to a Chinese ministry of transport official.

Some local governments have required companies to register and gain approval before resuming production, with business owners being detained for resuming without permission. However Beijing indicated on Tuesday that this went further than the central authorities had intended.
“Such a tendency must be stopped,” a delegate of the NDRC said. “We will strictly stop restricting resumption of production in this oversimplified and crude way.”
But local bureaucrats and alike just decide what they feel is OK, making it all a complete mess. And that happens all the time in Beijing, through the hygiene and other zillion departments. Their goal seems to be to harass small business, preferably run by foreigners.

And Reuters reports:
After reviewing reports on the outbreak from the NDRC and other economic departments, Xi Jinping told local officials during a Feb 3 meeting of the Politburo’s Standing Committee that some of the actions taken to contain the virus are harming the economy.
He urged them to refrain from “more restrictive measures”, it was said.
Local authorities outside Wuhan – where the virus is thought to have first taken hold – have shut down schools and factories, sealed off roads and railways, banned public events and even locked down residential compounds. Xi said some of those steps have not been practical and have sown fear among the public, they said.

But it seems many officials ignore the words of the President…