Call it Digibesity, Mal de Coucou or OCUD, I often wonder if it is not worse than COVID-19.
Like for the dreaded virus we face now, this mobile virus has a few names:

Digibesitas (Dutch) or “Digibesity” for our English readers.
Cellfish: Those who continue to talk on their cell phone, oblivious to the effect on others around them.
Nomophobia: refers to the fear of being without your mobile phone or without a cellular or WIFI signal.
OCUD (Obsessive cell phone use disorder) describes a person who continually talks on their cell phone or checks updates on mobile apps in public, while driving, meeting friends or eating in a restaurant. Or going to a classical concert. Mal de Coucou is a new buzzword, says China Daily: “Describes a phenomenon in which a person has an active social life but very few close friends”.

The plague of the new era

I already published a few posts with some hilarious (not sure this is the right word!) pics and cartoons:

You can, but I don’t care. However, do note I am also hours on my mobile, plus desktop where I am active on Twitter, LinkedIn, Facebook and a few others. I stopped Instagram, not that interesting. Livestreaming for foreigners in China is totally forbidden. Can’t use the app Douyin and always failed to activate TikTok. Well, maybe not missing that much.

But I hate to sit with “friends” at a restaurant when they have more interest in their mobiles (and making stupid selfies), and people walking, biking and even driving glued to their mobile screens. They totally ignore the real world around them and are only alive in their artificial world.
I love to walk around and see what’s around me. And enjoying my food. BTW be aware it is bad for your health to eat AND look at your screens at the same time.

I miss the pre-mobile era

Looking at an old VHS of Madonna public performances (she is one of the greatest performers), one interesting aspect: no mobiles yet. People chatting with each other, not glued to their mobile, not taking pictures. The public during the shows actually is listening to the music and paying attention to the performers.
I miss that time.

When I was young we had no mobiles, only the fixed line at home that we had to share with the whole house. Privacy was often a problem so I learned to whisper in the phone to the annoyance of my parents. We survived very well, managed to meet and date, and have fun. 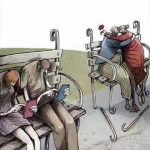 And a tell-all video: