Beside our regular meetings, Beijing Rotary in March had an exciting party in ROOTS on 23rd of March.
Cassidy, one of the only five Wine Masters in China gave us an introduction on new world versus old world wines.
To make the concept real he brought a Pinot Noir from New Zealand (cheaper and screw cork) and another one from France (more expensive and real cork) and explained the intricacies of each type of wine and wine processing; key aspects are acidity, transparency, alcohol content, body, hint of earth, hint of oak, hint of berries, tannin content and aroma.

Cassidy also gave a historical overview on how “Wine Masters” are selected and appointed worldwide and how they have to pass theoretical exams along with rigorous tasting tests.
We received two nice wine glasses marked I and II to taste (blindly) the two Pinot Noir wines and to give our opinion.

Good attendance, with members of the Rotary Club of Beijing and Rotary Club of Beijing East, along with visiting Rotarians and guests. It was a fantastic fellowship, a delicious dinner, high quality wine tasting. Zeyu Zhu, a cellist from the Juilliard School (New York famous school) entertained us with a nice classical music.

Acting President Didier chaired the meeting and gave an update on the upcoming events of the club.
Our latest member was inducted, Kevin Gouldmann. He received his certificate and pin from Didier. 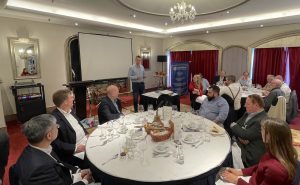 Kevin was also the speaker of the day, to tell us about his unusual profession as a “Klavierbaumeister” (master piano maker).
Kevin studied piano and music in USA but left for Germany when 21 because he felt he was not good enough to play piano. Instead of playing the piano he later chose the guitar instead.

What makes a good piano? Design, choice of materials and workmanship are the key factors. He learned the different aspects to achieve the right result, first as an apprentice in Berlin for over two years. He then moved to Hildesheim, for several years. Later he followed the complete Ludwigsburg Master Program as a master piano maker. He graduated successfully after a second tough exam.

He worked in a piano factory until he was recruited by a Danish company where he became owner and partner. Later he moved again to Germany and then to China. In China he is one of the only three master piano makers. He is still active with manufacturers in Europe and also did a stint in Abuja (Nigeria), where he lived colorful experiences.
He explained some of the key issues in making a good piano and also explained the different piano types.
He had to field many questions from the audience.

Gilbert let our visitor Sarah Wagner announce the publication of her book “Unleash Today”, that came out exactly on this day in all the major Amazon shops. We look forward for Sarah to give us a talk about her book that she wrote together with Kate Surala. 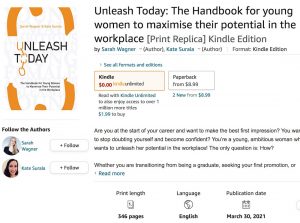 I already bought the Kindle version!