Before introducing the Rotary Club of Beijing, a bit of history.
The first meeting leading towards the establishment of the Rotary Club Peking took place over tea on January 18th 1923 when fifteen Americans and one Chinese met in the Wagon Lits Hotel in Peking.
The RC Peking with 22 charter member, was finally admitted by Rotary International (RI) on August 30, 1924.
The Club ceased to function on December 8th 1941 when the Wagon Lits Hotel, which served as the club’s headquarter, was taken over by the Japanese for their own use for many years.
RI re-admitted the RC of Peiping with thirty charter members on August 14th 1946, giving it the old Club No. 1814.
On July 18th 1950, RI approved once again the change of the name to Rotary Club of Peking.
On June 26th 1951 RI terminated the membership of the RC Peking and declared the Charter null and void.

The item “Provisional Rotary Club Beijing” was placed on the agenda of the June 2001 RI Board meeting. The RI board passed the motion to grant provisional status not only to Beijing but Shanghai as well, on 16 June 2001.
The Rotary Club of Beijing (Provisional) on 31 March 2005 had 53 members and 7 honorary members. President: Mosud Mannan – President Elect: Carl-Ludwig Dörwald.
On 8 February 2006 The Rotary Club of Beijing was formally chartered by RI, signed by RI President Carl-Wilhelm Stenhammar.
In that Charter year the Club had 57 members from about 16 different countries with Carl- Ludwig Doerwald – Charter President 2005-2006.
RCB received the new charter on 3 April 2014 referring to the original charter date of 30 August 1924.

What is Rotary, Rotaract & Interact?

Rotary International (https://www.rotary.org/en) is the world’s largest member charity organization with over 1.2 million members belonging to approximately 35,000+ clubs in over 200 countries and territories.
Founded in 1906 in Chicago by Paul Harris and a group of Chicago business philanthropists, it has its current headquarters located in Evanston IL and administers the world’s largest charity trust fund with more than $2 billion which has been significantly boosted by major contributions from the Gates Foundation and Warren Buffet; both of whom have historical family ties to Rotary.

Rotary International’s current Global Flagship Project is called ‘Polio Plus’ which is in its 36th year and has successfully reduced the global headcount of Polio sufferers from more than 350,000 at the campaign commencement to close to zero globally today and zero cases in India for more than 5 years.
See the details here: Rotary_introduction
and: Rotary_factsheet

Sadly we had to terminate our two Rotaract Clubs, due to lack of student members. We still have the Dulwich and ISB Interact Clubs.

I became myself a member on 11 January 2005.
RCB has been involved in many projects serving the community.
Some: Gift of Life (surgeries for congenital heart disease), The Library Project, and many more.
Current examples: surgeries for hypospadias and HOPE (Horses Offering People Enrichment), among other.
See https://www.beijing1980.com/2017/04/13/hypospadias-surgeries-need-support/

The new restaurant, run by our friend Thorsten Eckert now hosts the Deutscher Stammtisch Beijing.
The place is a bit hidden, on Xindong street, in the middle of the buildings across the street from the Bentley shop. It was previously “XL Bar”, but Jane emigrated to Qingdao to help run The Tree by The Sea, you guess who is the owner…
The place is small and cozy, with a large beamer and yes its own (clean) toilet.
Food basically German plus many other dishes. Even Paella.
I wanted to see the place on 26 January and bumped into the German Stammtisch people… No quiet evening that was! With great food and that Prinz Kirsch…

Stammtisch in German means “table for regulars” but is a concept in itself and the translations into other languages do not really convey the real meaning.
It reminds me of the Flemish word “stamcafé”, that can be translated as favorite bar or pub, habitual hound or even yes Stammtisch…

Actually years ago I was a regular member of the German dinners, mostly in Schindlers. So, I am “back”.
I joined again on 23 February.

There are of course the nice sausages but also some specials.

Mett / Mettigel is a preparation of minced raw pork that is popular in Germany, Poland and in Belgium; a similar preparation is made from beef. It is normally served with salt and black pepper, and sometimes with garlic, caraway or chopped onion, and eaten raw, usually on a bread roll. Or presented as a hedgehog… as you see in the picture. It came with nice side dishes to spice it up.
See:  https://www.mettsalat.de/die-geschichte-des-mettigel
Here it is done with beef. 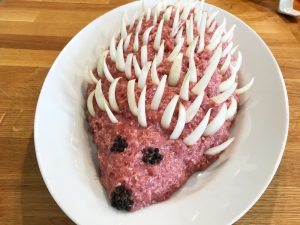 Year of the Tiger

With the golden week of Chinese New Year, Morel’s was closed on the first Friday, so we had the Old China Hands 11 February lunch instead. Great attendance with 38 present!

I organized a small lucky draw to celebrate the 2022 Winter Olympics. Two lucky winners got the pair of Olympic coins, Mark and Ferencz.

Morel’s Restaurant again offered a great lunch menu. I chose the Hachis Parmentier, that was a great but real filling dish!
See here some details about that dish:
French Beef and Potato Casserole
See: https://www.curiouscuisiniere.com/hachis-parmentier
Hachis Parmentier is a French casserole made with layers of mashed potatoes and beef, topped with cheese.

Edwin and me we go a long way. I already mentioned him in my following post:
“The top 60 foreign experts in China”
https://blog.strategy4china.com/2010/02/the-top-60-foreign-experts-in-china/
It mentions the book “60 Foreign Experts in China”, published in 2009 by the Foreign Languages Press. Listed are the “usual suspects” such as Israel Epstein, Sidney Shapiro, David Dollar, William Lindesay, Norman Foster, Edwin Maher and even Henricus (Hein for the insiders) Verbruggen. Yeah and myself.

I was also on the float with him on the parade of 1 October 2009.
See: https://blog.strategy4china.com/2010/01/gilbert-in-global-times-newspaper-web/

Many articles published about him… See here a few:
Article China Daily 28 January 2015 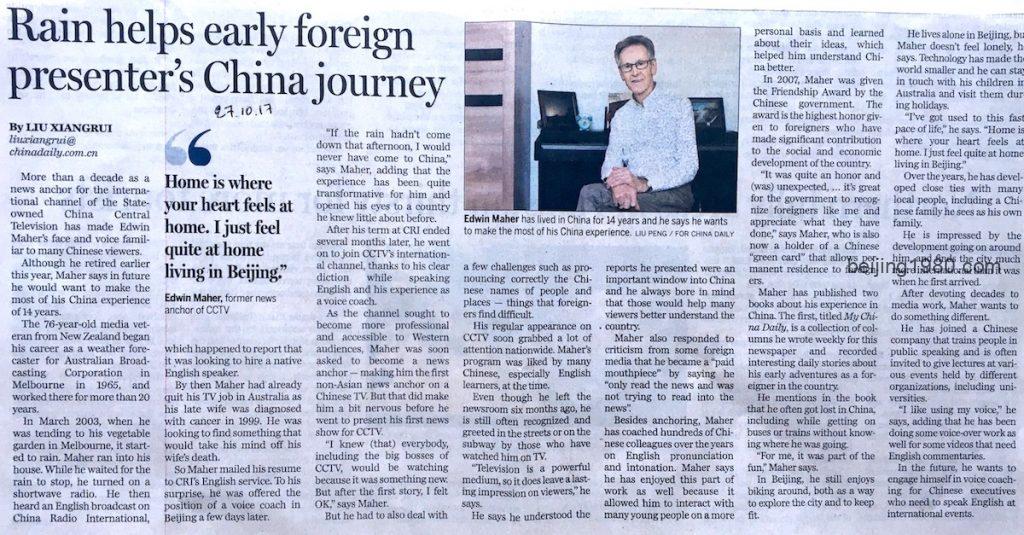 Edwin is currently away to be with family. Looking forward to see him again in our lunches.

Spotted by a friend

I found out – Forever bicycles good and bad. A friend took these pictures on the street in Beijing. Intrigued I looked up the brand, as we were impressed by the design and the apparently sturdy quality.

Turned out the brand is Chinese and well-known. Shanghai Forever is one of Chinese oldest bicycle manufacturers whose brand is one of the most popular among the Chinese bicycling community. Founded in 1940, the bike quickly became a Shanghai staple before expanding into the rest of the country.
In 2001, the Zhonglu Group purchased the Forever brand to develop ‘Green’ and environmental friendly products. The brand is known for their creativity and stable approach to building bikes at a cost effective price.

Their website: https://www.forever-bicycle.com/sy
The website is pretty well-done. But of the 208 different bikes shown, no trace of that one.

I used the contact listed on the website to enquire. Bad luck, as so often Chinese websites are not updated and don’t have a valid contact. Pretty sad for such a company.
So, will.yang@forever-bicycle.com did not work.
What could be the reason? Make a choice:

– the bike is a fake Forever
– Will was doing the website but left the building long time ago
– Will does not read English
– the company does not give a damn
– this is China!

Those bikes are mostly called “cargo bikes or cargocycles” and come in a variety of models. As far as I know you find quite a number in The Netherlands and Belgium.
See here more details:

Front mounted child seats
There are a couple of options for front mounting a child seat, and probably the simplest is a seat that attaches to the top of the handlebars – however, the added weight on the steering and much higher center of gravity can affect the handling of the bike.
Better options are front seats that attach to the top tube and steerer of the bike (which requires a level top tube), or to a bar that mounts between the seat post and head stem.

In our experience front mounted seats are best suited to smaller passengers. As they are situated under your chin as you ride, height becomes an issue. Some riders also need to resort to pedaling with their knees splayed out which can be uncomfortable on longer journeys. The big benefit of a front mounted seat is you and your child are able to interact easily, and they often participate in the riding experience (holding the handlebars, ringing the bell etc.). They are a great introduction or stepping stone for shorter journeys and will help your little ones get used to being a passenger on a bike.

We were impressed with our member Kevin who fasted one day so he could deal with the really big trout (I usually recommend it for 3 people to share).

“Krankin’ thru China”, a program launched by Joshua Dominick and Domonic Corradin, helps people with physical disabilities enjoy outdoor sports like paragliding, horseback riding, swimming, surfing and cycling. They presented their project to our club, on 10 August 2021, see: https://www.beijing1980.com/2021/09/15/rotary-beijing-in-summer-part-1/

See this article of Business Beijing of 1 June 2007 to read how our Georg Hoffman started working with protheses. See: 070601 OttoBock
He presented his project in our club on 17 August 2021. 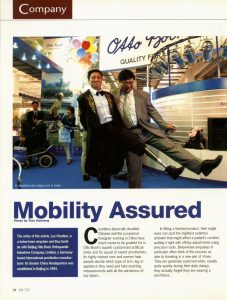 Happy to read this article: 220101 poledancing
I quote:
“Despite studios trying to promote the benefits, there is still a stigma attached to the sport by those who don’t fully understand it.
When I tell some guys I’m a pole dancer, they say, ‘Oh, you’re a stripper?’ I don’t get offended, they just don’t understand that pole dancing doesn’t have to be linked to stripping. I think a lot of people still don’t understand pole dancing and it’s still very niche.” 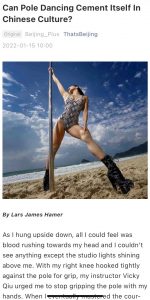