We want to point out there is no updated website of the Rotary Club of Beijing. The only official site http://rotaryclub-beijing.org/ is currently dormant.
Any other website claiming to be of the club is unauthorized and do ignore the content.

On my website I bring some news of recent activities of our Club but it is not as such the official website of the club. Any content here is my personal view.

Visit of our Special Representative

The present group of Rotary, Rotaract and Interact clubs in China is seen by Rotary International as a special “District”. As such we do not have a governor as itis the case for districts, instead we have a “Special Representative” (SR), Rtn. Richard. Officially our club is in District 0052 with Club Number: 60724.
Our weekly meeting of 20 October at the Kempinski Hotel we had a special guest: Richard , our SR.

He came over to discuss progress of Rotary in China and to learn about our club.
Before the lunch he met with members of the board.
As for now in China we have 28 Rotary clubs, 10 Rotaract clubs and 12 Interact clubs.
I joined the club on 11 January 2005.

See here a few slides about what is Rotary. For more, see the international website.

During our lunch in the Kempinski Hotel Liangmaqiao we had a World Bank talk in Rotary Club of Beijing by our new member Ben, to speak about a fascinating subject:
“China’ s infrastructure development – lessons and practices”

China has had a spectacular success in developing a massive infrastructure that has generated rapid economic growth and helped to lift 800 million out of poverty.
Many developing and emerging countries seek to understand how China was able to finance and develop such large-scale infrastructure. 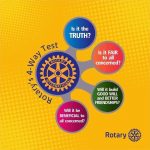 Ben Reja, World Bank Practice Manager for Transport Infrastructure based in Beijing, discussed China’s model of infrastructure financing and how the World Bank has been supporting various local governments to build up their infrastructure in an environmentally, socially, and financially sustainable way.

Not only the World Bank talk that day, we were also happy to see two new members, Christin and Ben, being officially inducted.
The Rotary Club of Beijing is sparing no efforts to attract new members to serve the community.

Another busy week for Beijing Rotary and Rotaract. We started with our weekly lunch in Kempinski Hotel on Tuesday 29 September.

Happy to see our friend Andreas back in Beijing and back to the club. More than ten years ago I had sponsored him to become member. Now he will hopefully soon be our member again.
Earlier we had our Social event for Beijing Rotary.

We still have a number of Rotarians and Rotaractors who could not yet return to Beijing.

On 30 September Treffyn organized a social Rotaract evening in a Chinese restaurant close to 3.3. It was our first “life” get together.

Thanks to Danny, president of the Rotary Club of Beijing, to join us.
Yeah after that dinner I still had to rush to Morel’s Restaurant as it was the “official drinking evening” for Renaat. Many bottles emptied…