There we go again, virusland is back, a repeat of SARS that brought chaos and headaches right in the middle of the preparations for the 2008 Olympics. Orders from our then big boss Wang Qishan (then Beijing mayor): “I don’t want to know about it. Do respect the deadlines for building the stadia at any cost!”. And so we did, the rest is history.

Severe Acute Respiratory Syndrome (SARS) was first “discovered” in Asia in February 2003. The outbreak lasted approximately six months as the disease spread to more than two dozen countries in North America, South America, Europe, and Asia before it was stopped in July 2003.More details, see https://en.wikipedia.org/wiki/Severe_acute_respiratory_syndrome

According to Wikipedia SARS started in November 2002 and in late 2017, Chinese scientists traced the virus through the intermediary of civets to cave-dwelling horseshoe bats in Yunnan province.

Because some Chinese ignore warnings not to eat exotic wild animals (often illegal), a continent is being shut down with immense economic losses and canceling family reunions. Great. The coronavirus is paralyzing China and no one knows for how long and at what economic cost, considering the losses in tourism, hotels, F&B, Spring Festival markets, manufacturing, trade, education…

It is now pretty certain the new virus comes from a market in Wuhan where also wild animals were being traded. The Huanan Seafood Market has a thriving wildlife trade, selling animals from foxes to wolf puppies, giant salamanders to peacocks and porcupines. 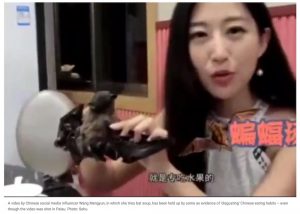 Xenophobic chatter about mainland Chinese and their eating habits has spread across the world since the first cases of the novel coronavirus. From SCMP article. Pic was all over the Chinese media.

Some say “Old habits are difficult to break. Not that long ago millions starved to death in China. At that time people were grateful to have anything  to eat.”. I don’t see it this way at all. It is the belief that “special meat” can bring exceptional effects for health (often sexual power). The more exotic. the better. E.g. dog meat supposed to be good in winter, bringing “warm” to the body. Bats (fruit bats in particular) are special for blood circulation and in case of strokes; also strong aphrodisiac; snake (especially the bile) for the lungs. I do not see the connection as such with the history of famines: I would then rather look at vegetables of all kinds where everything can be used. Vietnam has similar attitudes. It is also often to show off to say “I can afford this”. Or “I dare to eat”.

This needs to change

People seem to overlook that there is a need to stop the dangerous animal trade, not even to mention the issue of eating cats and dogs.

Remember? SARS-CoV is thought to be an animal virus from an animal reservoir, as mentioned above, that spread to other animals and first infected humans in the Guangdong province in 2002. China then banned in principle the sale of civet cats and other. The government should fire the Wuhan hygiene inspection team and others who turned a blind eye to the wildlife trade and let it happen again. The customs is so rigid for the import of food (e.g. French cheese and many other) while not dealing with local illegal animal trade.

Let’s hope that the draconian measures from the authorities will avoid worse. The government has ordered now to shut down all wild animal markets and closely monitor farms where those are also bred.

But will those measures last? Temporary restrictions will not solve the underlying problem, animal rights activist says.

Chinese creative mask (not recommended)(click to open the video clip)

Another article calling for action on the matter:

China coronavirus: Beijing should close down live-animal food markets to stop similar diseases emerging in future. As long as markets exist that sell exotic animals for food, the likelihood of other new diseases emerging will remain.

3 thoughts on “Virusland is back”