Yes of course many will dismiss it all but people need to wake up to reality. Good luck to those who ignore the pandemic. And continue not wearing masks when you need. Oh yes because the governments were totally clueless and did not react in time to the shortage (except increasing more red tape). See here part of their newsletter (edited).

Tens of thousands of Americans die, we have double-digit unemployment for months, countless businesses die, retirements are wiped out, and the nation is saddled with once unimaginable debt.
That, folks, is the best case scenario we’re facing.
That’s if we’re lucky — and doesn’t even mention the lost graduations, honeymoons, weddings, and other important missed milestones.

A survey of epidemiology experts, posted by a scholar at UMass Amherst and reported by FiveThirtyEight, predicted that the number of cases reported by the end of this month would most likely fall somewhere between 10,500 and 81,500.
We’re already right around 20,000 cases, so the lower end of those estimates is out the window.
The same survey anticipates about 200,000 deaths in the U.S. this year, but experts have established a range that stretches from as few as 19,000 deaths to as many as 1.2 million.

A true best-case scenario would look a lot like the response in places like Singapore and South Korea, which were able to quickly “flatten the curve” and bring the number of new cases under control.
But the U.S. simply has not been doing the things that worked in those countries, so whatever our best-case scenario may be, it’s not that good.

Containing the virus requires us to know where and how bad outbreaks are. The only way to get that information is through widespread testing, which the U.S. can’t do right now. The U.S. has been playing catch-up on testing this whole time, largely because of early decisions from the Trump administration that severely limited the number of available tests.

The coronavirus seems increasingly likely to plunge the world into economic times worse than anything we’ve seen in decades. In the U.S., layoffs have already started. As many as 2 million people could file for unemployment aid next week— and we’re barely two weeks into a widespread societal shutdown that could stretch on for weeks or months. 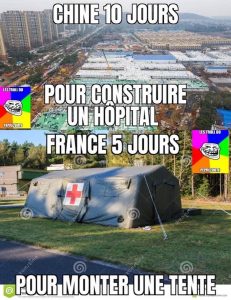 Taking it easy.
A voice told me Horus and Thoth are admonishing to repent as they have unleashed the virus and locust plagues. 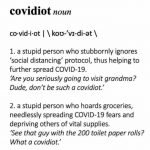 Oh yes, churches. mosques and all are closed. As all non-essential services are banned.

Meanwhile spring has arrived on my Beijing balcony. Have a nice Sunday. I might have a steak tartare this evening in my favorite restaurant. I’ll ask Horus first.