We finally met in person

I mentioned the famous Cao Cao earlier. As it happens a lot, being a regular in Morel’s Resturant also allows me to meet a wide range of people, some simply nice, some unexpected, some, well, simply famous.
With the restaurant recently hopelessly full, some patrons are “forced” to sit at the chef Renaat’s table, the usual table for Renaat and Susan (and me). Often turns out the best that can happen to you!

On 2 March the “VIP table” had the Amcham president and our long-time friend Gaiya. And Cao Cao, the Internet celebrity, famous foreign actor and now also author.
I admit that I had at first a bit of a mixed opinion about such a “celebrity” but meeting him was a real pleasant surprise. He has a very interesting background, many fascinating stories to tell and he is a very “international person”.
He had just returned from a movie shoot in Jilin, having the leading role in a new Chinese movie. That experience was a unique story in itself.
He speaks fluently the Beijing Chinese dialect. And he made this clip about the Morel’s Restaurant that clocked some 45 million views (no typo here). He is on Douyin “caocaolaile666”. 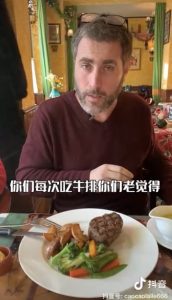 You can watch the video here (there is no suitable link to Douyin…): https://youtu.be/lm24WNVqr-o
That video is largely the explanation why the restaurant has seen an invasion of Chinese… He has also other very popular Douyin videos…

That video led to the creation of a “Cao Cao menu” in the restaurant… He loves the steak with béarnaise and a waffle. As you can see, and accompanied by his usual bottle of Belgian beer (St Bernardus).

Jonathan Kos-Read (“曹操 Cao Cao”) is his real name. His book “The Eunuch” is to come out very soon, see the cover where you read about his background. Interesting and impressive; the book is pulished through Earnshaw Books, of Graham Earnshaw, whom I met a couple of times, see here in Shanghai.