So, what is peperkoek?
Some translate peperkoek as gingerbread or spiced cake or honey cake; pain d’épices (au miel).

According to Wikipedia :
An ontbijtkoek (literally translated breakfast cake) or peperkoek (pepper cake) is a Dutch and Flemish spiced cake. Rye is its most important ingredient, coloring the cake light brown. It is often spiced with cloves, cinnamon, ginger, succade and nutmeg. Several parts of the Netherlands have their own local recipe, of which the most famous is oudewijvenkoek (old woman’s cake)[citation needed], which is mostly eaten in the northern regions, and is flavored with aniseed. Ontbijtkoek is traditionally served at breakfast with a thick layer of butter on top, as a replacement for bread, however, due to its sweet taste it is also served as a snack. It is best eaten the day after it is baked.

What is onbijtkoek?
Onbijtkoek, or peperkoek, is a traditional baked cake of Flemish and Dutch origin. This spice bread is made from rye flour, all-purpose flour, milk, honey, black molasses and brown sugar. It has a fairly dense texture and a dark brown coloration due to the presence of rye flour.
Very flavorful, it contains many spices: cardamom, cinnamon, ginger, coriander, cloves, nutmeg, black pepper, vanilla and anise.
Across the Netherlands and parts of Belgium, there are many varieties of ontbijtkoek available in stores. Some contain candied fruit, ginger or even nuts and are sprinkled with pearl sugar.

In the north of the Netherlands, the local variant is called oudewijvenkoek, which can be translated to “cake of old women”. It is very similar to ontbijtkoek, the particularity of oudewijvenkoek being that it is more flavored with anise.
Another version is called kroninger koek, and for its part contains pieces of candied lemons.
Finally, Deventer koek, which takes its name from its origins in the city of Deventer, is traditionally flavored with bitter orange.

While I must be careful with sugar and carbs, I love my peperkoek, having two slices for breakfast on Saturday and Sunday, with butter. My preferred brands are Meli (not the one with pearl sugar on top), see their famous Honingkoek (couque au miel) (https://www.meli.be/producten/honingkoek) and Vondelmolen.

My Dutch friends satisfy my craving by bringing the Dutch versions such as Bolletje and Peijnenburg; they come is nice plastic containers I use for the Belgian ones. The taste is different but they are very nice too.

As for now it has not been accepted by Chinese customers, the general reaction is “too sweet”. A bit strange as some Chinese deserts, sweet and snacks are nearly pure sugar. Maybe they should try them with afternoon tea and with butter!

In a previous post I explained what is witloof. Now more about its history; discover variants such as groenlof en roodlof (sorry, explanations in Dutch only). Both groenlof and roodlof are closely related to witloof. A reader alerted me about those! (thanks)

Where witloof was created

Witloof is known in other parts of the world and languages as: Endive, Belgian Endive, French Endive, Witlof, Witloof Chicory, Chicory, Chicon, and Endivia.

The most popular history behind the discovery of Witloof is of a Belgian farmer living near Brussels around 1830 having stored some chicory roots in his cellar, intended to possibly use them later as a coffee substrate. He came to retrieve them at a later time only to discover white shoots coming out of the head of the root due to the climate conditions in the cellar, which he then tried to eat and found edible.

What Is fact?
Between 1850 and 1851, the head overseer of the Botanical Gardens in Brussels, Monsieur Brezier, developed methods to grow the chicory shoots out of the roots using darkness, warmth, and humidity.  Darkness was essential in producing the white leaves, aka “wit loof”, since the plant doesn’t produce chlorophyll (the green leaf colouring) without light. The crop was first sold on the Brussels market in 1867 and later in 1883 in the Halls of Paris. The witloof crop became bigger and more closed over time as growing techniques improved and better varieties were developed. Today, witloof is a very common European vegetable whereas in many other areas of the world it is still considered a niche product. 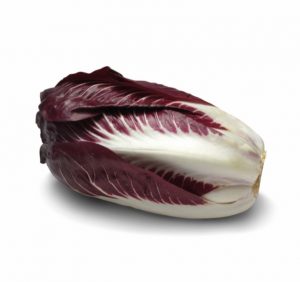 Back to social life

Beijing being without doubt the safest place in the world, free of COVID-19, Belgians in Beijing have been getting together recently, with a social drink and with an official reception at the Belgian embassy.

The BiB had a successful social on 29 October 2020 in Groovy’s Schiller (the former Nearby The Tree), a lively chat over beer and food.

We are also looking forward not only to the revival of the BiB but also to the upcoming activities of Vlamingen in de Wereld, with its new Beijing delegate.

King’s Day is more or less considered as our “National Day” in locations such as Beijing as the real National Day is on 21 July when most people are away.
On 13 November 2020 the Belgian ambassador graciously invited the Belgian community to his residence for drinks and food. It was good to be back in the “old” embassy (actually now the Residence only), with the present “temporary” embassy in the Fort Knox building, a pretty unwelcoming location.

Food was by Renaat Morel, delicious and copious as always, drinks offered by the sponsors (Stella Artois, Hoegaarden, Vedett and others).

The ambassador mentioned in his speech the absence of many of our compatriots. At least we had the Schtroumpfs to keep us company.

Very nice evening thanks to the mild winter temperature. Good to meet many familiar faces.

Our Old China Hands 6 November lunch had a nice crowd of 34 people. New faces and also some who managed to come back after the imposed quarantine. We can now say Beijing is the safest place to be in this dangerous virus world…
Again our friend Kent surprised us all with a big box of his home-made cookies “Halloween” theme. Thank you Kent!
While the “official” start time is 12:00 half of the tables are full well before midday. All eager to join the lunch!

Renaat Morel, the boss of Morel’s Restaurant still sticks to his special price for our set menu. I guess an increase is due for January as it is really (too) cheap.

The next lunch is set for Friday 4 December, the last one of the virus year.
We hope to see more of our members back from abroad.

The vegetable that we call witloof or chicon or endive is mostly translated in English as “endive”. The translation is misleading. In Belgium we call it witloof in Dutch and chicon in French. 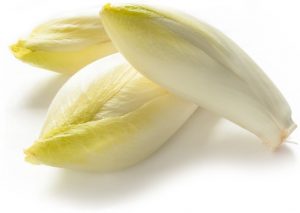 The correct defintion:
A variety of the common chicory (Cichorium intybus var. foliosum) cultivated to produce a narrow, pointed, blanched cluster of leaves used in salads.
Chicon is the name given to a type of endive. Bitter-tasting and white with yellow edges, this type of chicory can be eaten raw or cooked.
Also called Belgian endive, witloof, witlof, chicon, witloof chicory, Brussels witloof.

For me the signature dish of Morel’s Restaurant is this one: 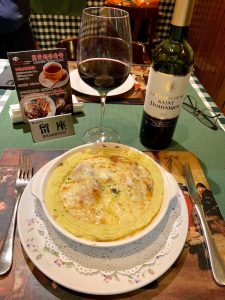 Simply de-li-cious. But better be hungry to finish it!
Called “chicon au gratin” it is in fact “witloof in hespenrolletjes” (https://www.lekkervanbijons.be/recepten/witloofrolletjes-met-gekookte-ham) – a very popular and traditional Flemish dish – is also called endive and ham gratin, endive with ham and cheese sauce or chicon gratin.

And another description:
Chicons au gratin is a Belgian national dish consisting of braised Belgian endives  (aka chicons) wrapped in slices of baked ham and covered with a Mornay sauce and some grated cheese.  Steaming hot with a creamy cheesy sauce, chicons au gratin is comfort food par excellence.  The bitter Belgian endives mixed with the sweet baked ham also make a winning combination.

In Belgium and Holland we do have a vegetable that we call “andijvie”; it is a a plant (Cichorium endivia) in the composite family, of South Asian origin, having curled or ruffled leaves with a bitter flavor, cultivated as a salad green. It is closely related to “witloof”.
It is used as a salad or cooked in a few local dishes, or mixed raw in Dutch potato dishes (“stamppot”). 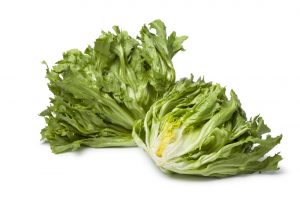 See here the explanation in Dutch and different recipes to prepare “andijvie”, more on the original website:
https://dejuistekooktijd.nl/groente/andijvie-koken-en-bereiden/