Yashow, one of the most popular shops for foreigners, is closing for renovations soon, and who knows what sort of stores will return. As a result enormous crowds have invaded the store to grab Christmas bargains. The store is on Gongti Bei Lu, next to The Village (yeah yeah it changed name to Tai Ko Li something).
As reported on local websites:

Legal Daily, the source of the news, interviewed a shop owner who has been at Yashow since its opening 12 years ago told the reporter that “all shop owners received a notice from Yashow’s administration that our contract won’t be renewed after this year, and we were asked to move out by December 31.” Now the sweaters that used to sell for few hundred kuai are sold only RMB 35, and the jackets which were priced RMB 500 are sold only for a fifth of that.
“We are just selling as much as we can for we are moving soon,” said the shop owner. When asked whether he would come back after the renovation, he shook his head and said that “he would see.” 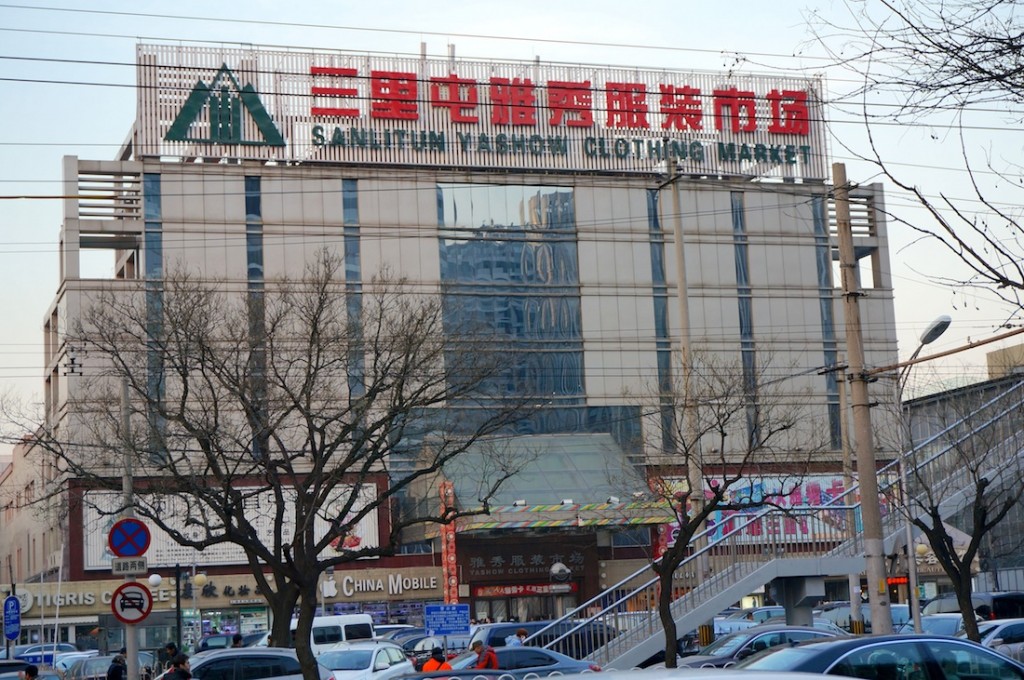 The report doesn’t speculate if the renovation will make the place more high-end, but the rent will certainly go up. Mrs. Chen, owner of a socks shop, told the reporter that the rent of her shop is about RMB 40k per year now, and she speculated that it would probably go up to RMB 200k-300k per year. She said that if the rent hike would stay within a reasonable range, she would still come back for the sake of her regular clients and “her attachment to the place.”
A worker at Yashow’s supermarket said, “We only know that the contracts won’t be renewed but we know nothing about what the place will be like after the renovation,” adding “Probably only those shop owners who can afford a higher rent will come back.”
The renovation will be finished next April. Many shop owners said that “they will wait and see.”

I admit we have been part of that crowd to empty the stores. Bought some very good stuff there, at a ridiculous bargain price, one can wonder: fake or genuine stuff? Honestly, the fakes are that good I have no idea at all.

On 5 July Renaat and Susan asked to be the “good Belgian customer” in a program of BTV Sports channel, as they were both in Belgium. I gladly accepted.
We spent several hours in my favorite restaurant, “Morel’s Restaurant”,  on Worker’s Stadium North Road (gongti bei lu)  with the BTV crew to check out the decoration of the restaurant, some of the many Belgian beers and of course to taste some of Renaat’s signature dishes: “Belgian Grey Shrimps with tomato”, “Belgian beef beer stew”, Mussels, Belgian fries, Belgian waffles and more.

It was fun working the friendly BTV crew, even more having a wonderful tasting event. Once the real shooting was done, we all sat together for a real Belgian banquet with never-ending dishes and beer. My daughter joined us later and we both showed our Belgian colors to support the Belgian football team. Our BTV host did a good drinking job of the many Belgian beers… great performance!
I was so stuffed I needed an extended siesta and forgot about dinner.
The same evening the program came out on BTV, as a runner-up to the World Cup match Belgium-Argentina. OK, we lost to Argentina 0 to 1 but the Red Devils did what they could and, hey! our Dutch friends also did not manage to win… Made us feel a bit better.
Anyway the Belgian team made us feel proud.

Lama Temple is the largest and best-preserved lamasery in Beijing. The “Yonghe Temple” is located in Beijing’s Dongcheng District, near the northeastern corner of the Second Ring Road. Lines 2 and 5 of the Beijing Subway both stop at Yonghegong Lama Temple Station.
It was built in 1694 during the Qing Dynasty (1644-1911) as the residence of the Emperor Yongzheng. It originally served as an official residence for court eunuchs. It was then converted into the court of the Prince Yong (Yin Zhen), a son of the Kangxi Emperor and himself the future Yongzheng Emperor. After Yongzheng’s ascension to the throne in 1722, half of the building was converted into a lamasery, a monastery for monks of Tibetan Buddhism. The other half remained an imperial palace.
The temple is said to have survived the Cultural Revolution due to the intervention of Premier Zhou Enlai. It was reopened to the public in 1981.
The resplendent architectural complex is endowed with the style of an imperial palace, making it distinctive from others. It occupies an area of 66,400 sqm and can be described as a mini-palace with yellow glazed tiles on the roof and red walls circling the group of buildings.
Every element of the temple is entirely symmetrical, with main halls on a north-south axis and wing halls on both sides.
The Temple is arranged along a north-south central axis, which has a length of 480m. The main gate is at the southern end of this axis. Along the axis, there are five main halls which are separated by courtyards: the Hall of the Heavenly Kings (Tian Wang Dian or Devaraja Hall), the Hall of Harmony and Peace (Yonghegong), the Hall of Everlasting Protection (Yongyoudian), the Hall of the Wheel of the Law (Falundian), and the Pavilion of Ten Thousand Happinesses (Wanfuge).
The temple combines various architectural styles of the Han, the Manchu, the Mongolian and the Tibetan.
The Pavilion of Ten Thousand Happinesses the last main hall, is the highest hall of this temple. It is a three-storey building  and contains an 26 m tall (18 m above the ground and 8 m underneath) statue of the Maitreya Buddha carved from a single piece of White Sandalwood. The seventh Dalai presented it to the Emperor Qianlong, the son of Emperor Yongzheng. The statue is one of three artworks in the Temple which were included in the Guinness Book of Records in 1993.

Pics taken in Spring 2014.
The temple is intensively used by Chinese people to pray and ask for favors. Incense is now strictly controlled to reduce pollution and one gets a standard package when going inside. Normally one uses three incense sticks each time at each altar, sometimes the tips are first put into a fire, sometimes just used like that. After kneeling and then bowing three times, the sticks are left in a container. Mostly people have to stand in line for their turn to kneel down.
The admission ticket also comes with a mini disk with a VCD introducing the temple.

The park in Beijing has the longest and best preserved section of the city’s Ming Dynasty city wall. The park is located 3 km from the city center and extends west from Chongwenmen to Dongbianmen and then north to near the Beijing Railway Station. The park features a 1.5 km section of the Ming city wall and the Southeast Corner Tower, which are over 550 years old and surrounded by green park space to the south and east.

Pictures taken on 6 April 2014.
Beijing’s inner city wall was built during the Ming Dynasty in 1419. The Ming city walls stood for nearly 550 years until the construction of the early 1960s when most of the gates and walls were torn down to construct the Beijing Subway, which runs underneath where the walls stood. The subway’s inner loop line turned into the old city at Chongwenmen to stop at the Beijing Railway Station, and did not need to run beneath a section of the wall at the southeast corner of the inner city. Of the 40 km of the original wall, only this 1.5 km section was spared. Inside this section of the wall (north of the wall) are railway yards of Beijing Station. Outside the wall (south of the wall) stood residential homes and small businesses.
In the late 1990s, the city government decided convert the remnants of the wall into a park and relocate the small businesses and homes between the foot of the southern city wall and Chongwenmen East Avenue. Construction began in November 2001 and the park was completed in September 2003.
More details: http://en.wikipedia.org/wiki/Ming_City_Wall_Relics_Park

On 2 April I was invited for a tour of the Conrad Hotel on the Eastern 3rd Ring Road. After a great lunch (nice steak!) I was shown around the hotel. Nice architecture and the rooms are really impressive, even the so-called “standard” room. See the exterior and also views of the polluted 3rd Ring Road, as seen from one of the corner rooms.