In Beijing Workers Stadium story3 a look at the less talked about developments in the Gongti area. Indeed TheBeijinger and China Daily have been showing some details of the Workers Stadium but little or nothing about the other constructions going on in the area. See earlier post.
Much more to come, stay tuned!
In the Workers Stadium East Road (gongti dong lu) a big rather strange building is taking shape. That is supposed to be the “China Philharmonic Orchestra Concert Hall and Rehearsal Facilities” according to some Chinese signs at the construction site. No details available… 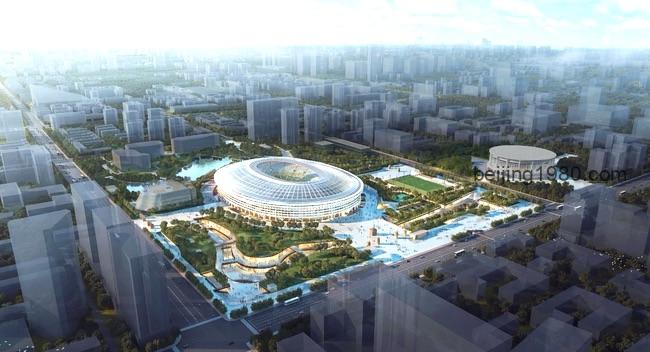 In this design sketch, the concert hall is right on the left of the new stadium. The view shown is from the north-east corner of the gongti area.
In the same picture, in the upper left corner, barely visible, are 3 buildings, located at the south-east corner of gongti area. Most of those are on Workers Stadium South Road (gongti nan lu).
Those buildings are really a bit mysterious, nobody talks about it. On the construction entrance (gongti nanlu) they mention something like “Tennis, Swimming Pool and 9 other items including Museum renovation and Beijing Staff Sports Service Center”. The two buildings on that road are very big and empty inside, so I guess at least one is a swimming facility.

See the pictures taken since may 2021 until recently with the progress of those buildings. On gongti nan lu it all started with an enormous excavation pit, there must be a lot underground.
See the dates and the locations. They are now putting windows. I still have no idea about the huge steel beams sticking out.

Other constructions nobody talks about

Right in front of Morel’s Restaurant in the night of 31 May 2018 they were pumping mud into an improvised water basin. We guess it was related to the underground work for Subway line 3. The following day all was gone without a trace! Impressive!

What is going on in and around the Workers Gymnasium is also a mystery. See a nice recent shot from the gymnasium and the buildings being razed around it on the south-west corner of the gymnasium, very close to Julong Garden.
They might also break down the interior of the gymnasium, with many trucks taking away mountains of construction debris. Right now the mountain of debris are gone and the last trucks are picking up what can be recycled. But nothing to see outside of the gymnasium… so not sure.
The statues of the Stadium area are still at the gymnasium but are expected to be put back soon.
On Workers Stadium West Road (gongti xi lu, my street), also mystery construction on the sidewalk that started in July 2022. Soon in August steel structures came up. At least one of the 3 constructions spots would be an electric substation of China Grid for the area.
Also the new big gates of the Workers Stadium are rising up (north and west sides). 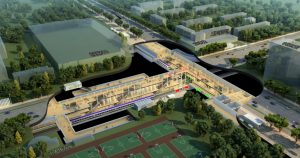 The old and the new

The Beijing Workers Stadium story1 (“the gongti area”) is the first of a series of articles about this famous Beijing landmark, its history, what the future holds and the progress of construction.
I posted several earlier articles since 2020:

Gongti strip to disappear – 10 August 2020
The gongti strip to disappear, along with all bars, discos, restaurants and shops in the Workers Stadium area. Some historical facts and data. I announced the dramatic changes for my beloved Gongti Strip, the dramatic disappearance of many beloved nightlife spots, some history of the Workers Stadium like the WHAM concert!

Beijing Gongti demolition – 23 September 2020
A latest update on the closing of Legend Beer, Thai Laburnum and others in the Gongti area. A last look of Legend Beer.

2020 is a tough year – 7 October 2020
A tough year for many businesses in Beijing, too many to mention. Some are the victim of the wave of destruction, for the other it is the impact of COVID-19.
Sadly since then it got much much worse. The old “Gongti Strip” is now dead. Sad.

As posted earlier, the whole area around gongti has lost so many nice restaurants and bars. Legend, The Den, and also Tairyo (Korean style) from where you had a nice view on the old stadium.

See some pictures of the old stadium. The statues have been removed and stored at the west gate of the Worker’s Gymnasium, they will be put back later.

See the dates of the progress.

The history of concerts and other events

I reported earlier about the WHAM concert.
Here a compilation of press articles about the many concerts, the interview with me and background of WHAM. See the official program.

I was also at the concert of Bob Dylan – Workers Gymnasium, April 6, 2011.
Not mentioned here is the impressive AIDA opera staged in the Stadium on 28 September 2003, see here:

I need to write about that, found back the pics.

Our Old China Hands lunch 2 September brought together 32 of our members. We also welcomed the baby of OCH Josh. As always, all happy chatting and enjoying the good food.

The next lunch is planned for Friday 7 October, due to the October 1 holiday week.

And more about our famous OCH

Raja is competing with our star Mark for media exposure.
See here his latest in English through Beijing Review.

But beating all is Renaat Morel. I guess he has like an interview every two weeks…
On 10 September at 10 pm we all watched live BRTV showing a program about the GuoAn soccer club and its long relation with Morel’s Restaurant. GuoAn normally uses Worker’s Stadium as its base and should return there once the new stadium is opening, I guess early next year.

I don’t have the link for you to watch but see some screenshots while we watched on the iPad. And of course the famous candle…

Beijing Worker’s Stadium taking shape, this time one can see the outside perimeter and the rooftop being constructed.

See here earlier posts of what is going on in our gongti area:

The construction area is immense and as said earlier, other arenas and buildings are coming up besides the main stadium.
The area also has many container buildings to house the dormitories and offices for the construction companies.
Leaving across the street I must say we have no any problems and have not been hindered by the huge construction, despite a continuous flow of concrete mixers and other heavy trucks. Many start delivering in the late evening and it is all pretty efficiently organized.

What we can expect

See here how the stadium looked around 1959, seen from the south. The whole area around it has changed dramatically. And a few pictures of what we can expect.

Here also an article in Chinese with Google translation about the new stadium.

“In 2023, the new sports club will host the opening and closing ceremonies and finals of the Asian Cup.”
I keep you posted of the progress, thanks to a Dutch lady who makes the panoramic pics from her apartment.